We are a reader-supported site. We may earn a small commission from purchases made through links on our site at NO extra cost for you.
Home » Yamaha EF2000iSv2 Review – Is It As Good As Everyone Claims?

Yamaha EF2000iSv2 Review – Is It As Good As Everyone Claims?

However, it is really worth its comparatively high price tag? Does it really live up to its reputation? In the following review we are going to have a closer look at this inverter generator and try to answer these questions as well as the most important one – should you buy it? 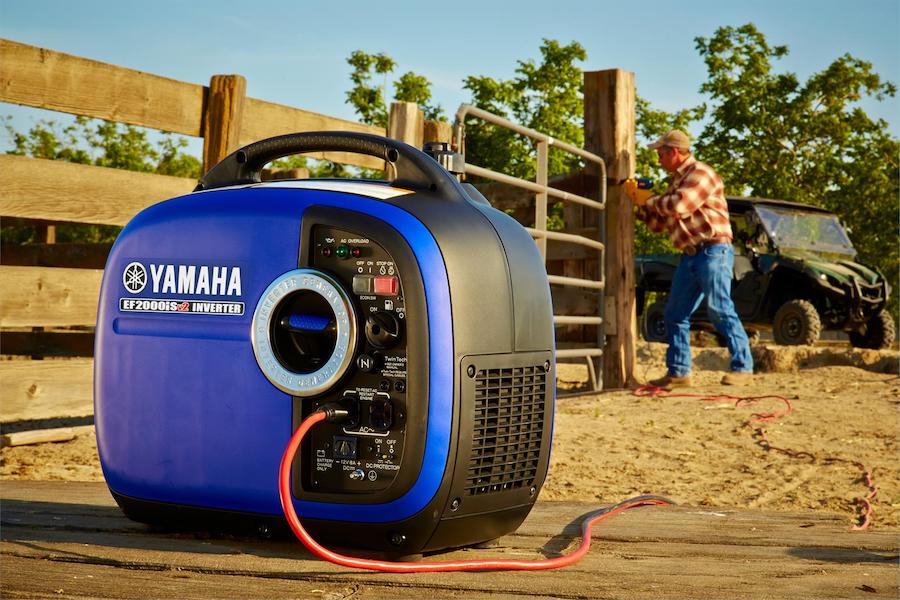 It has a very sleek design which in my humble opinion looks way much better than its main competitor – Honda EU2200i. Honda has been often criticized for looking boring and ugly. True, it certainly wouldn’t win any beauty contests.

On the other hand, Yamaha EF2000iSv2 proves that an inverter generator can not only deliver its job well but also look attractive. This is a type of generator you can proudly use on a campsite or at an RV park. 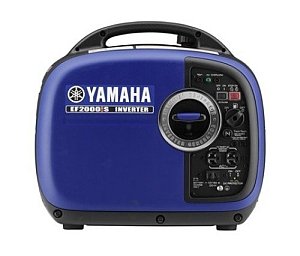 EF2000iSv2 is simply the newer version of EF2000iS – an incredibly popular inverter generator.

The main difference between these two is that the new EF2000iSv2 can run for a much longer time on maximum loads. The previous version (v1) could only run for less than half a minute at the max output (which is 2000 watts) before overloading. In other words, there was no chance you could use it to start larger appliances such as RV air conditioners. Those require higher surge wattage and a bit more time before fully switching into the running mode. Therefore, the first version of EF2000iS could not guarantee the proper operation of such electric equipment.

The engineers from Yamaha have done a great job fixing this major weak point in the newest version. Thanks to the redesigned controller board EF2000iSv2 can run for up to 13 minutes before showing signs of overloading.

This basically means you can now use this generator to power more demanding electric equipment without having to worry that it will switch off after a few seconds.

Needless to say, this is a massive convenience and something especially the RV owners are definitely gonna love.

How quiet is it?

Nobody loves to listen to the sound of a generator engine.

That’s why you are probably looking for a generator which produces as little noise as possible.

Unfortunately, there is no such thing as noiseless portable generators operating on gas. Solar powered units are the only ones which do not emit any sound but those are only suitable for very small scale use (eg. for charging laptops or phones at a campsite) due to their very low power output.

The good news is that inverter generators are generally much quieter than their conventional portable counterparts.

After researching dozens of inverters we can happily conclude that Yamaha EF2000iSv2 is one of the quietest you can get.

This is comparable to two people engaged in a lively conversation.

If you decide to use this generator at an RV park, you will hardly hear anything when resting in your RV in the evening while the generator does its job outside.

It is actually so quiet that the US Forest Department gave it green light to be operated at their campsites during the so-called “non-quiet” hours.

It is bound to become louder when running on higher outputs though.

This is a perfectly normal thing and does not change the fact that this is simply one of the quietest portable generators available on the market.

When it comes to inverter generators, Honda is undoubtedly Yamaha’s main competitor.

The previous version of Honda’s inverter – EU2000i used to be one of the first inverter generators on the market and it quickly became customers’ favorite. It was later replaced by a more efficient model – EU2200i. How does it compare against Yamaha EF2000iSV2?

At a first glance, Yamaha EF2000iSv2 looks definitely prettier than Honda. It also weighs less and is easier to carry around.

Both generators are very quiet. Yamaha is slightly quieter at higher loads though, which gives it a little bit of an edge.

The new EU2200i offers more wattage than Yamaha. While 200 watts is not a huge difference, it still puts Honda slightly ahead of the competition.

The price is tag is similar too. However, Yamaha tends to sell for a bit cheaper depending on the dealer.

Generally speaking both generators are definitely worth consideration although Honda might have a little bit of an edge when it comes to the sturdiness of its build. 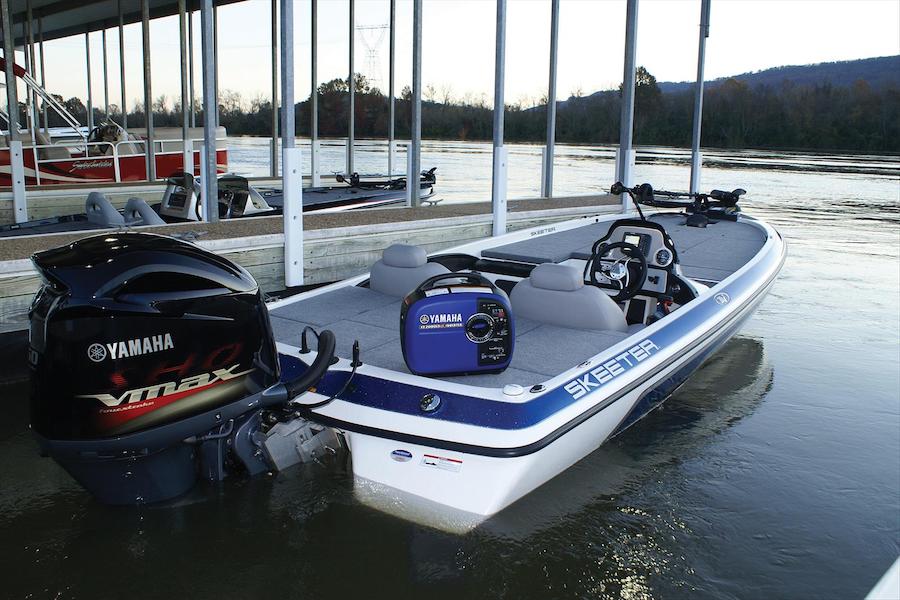 What Do the Others Say?

Yamaha EF2000iSv2 has generally attracted very positive reviews from people who got a chance to use it. At the time of writing (May 2019) more than 400 customers have published their reviews on Amazon.com, most of them being overwhelmingly positive.

Users generally praise the quality of its engine. Yamaha makes some of the sturdiest and most reliable engines and the one installed in EF2000iSv2 is no exception. In fact, there are plenty of other inverter generators on the market which also have the built-in Yamaha licensed engines.

Another thing a lot of people like a lot about this inverter generator is how quiet it is. Silver Cymbal has released a great video review which proves that this is indeed a very quiet generator.

Are there any downsides?

I would say the only thing I don’t particularly like about this generator is its high price tag.

I am writing this knowing that there are other inverter generators equipped with original Yamaha engines which cost a few hundred dollars less.

These are Wen 56200i and Smarter Tools STAP-2000iQ (click the links to see them on Amazon – IMHO the most reliable place to buy them). Both come highly recommended (especially the former), offer the same capabilities and are much cheaper. Both feature on my list of the top 10 inverter generators.

However, if you are eager to purchase an original branded generator with the name Yamaha on it – then you can’t really go wrong with EF2000iSv2. 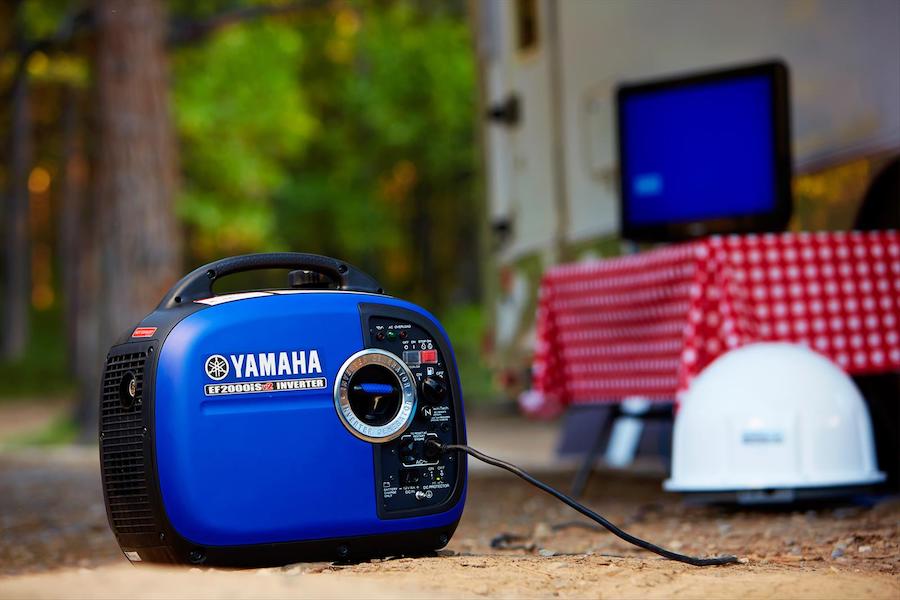 Final Verdict – Should You Get It?

If you don’t want to go on any compromises on quality and need a trusted branded portable inverter generator – you should seriously consider purchasing this model.

Aside from the high price, it does not really have any weak points.

Thanks to its quiet operation and small size it is a great choice for campsites and RV parks.

It also offers the parallel capability which means that in case you need more wattage, you can get two of these generators and connect them together to double the total power output.

All in all, it is one of the best inverters I have come across so far and clearly one of the quietest too.

Yamaha truly deserves its hard-earned reputation as one of the best manufacturers of inverter generators. EF2000iSv2 is one of the top models available. If you are not put off by its price - you can't really go wrong with purchasing this inverter.