We are a reader-supported site. We may earn a small commission from purchases made through links on our site at NO extra cost for you.
Home » Honda EU3000is Review: The Best 3000 Watt Generator?

Honda generators are among the most sought-after on the market. The Japanese company has earned its well-deserved reputation mainly thanks to the quality inverter generators they produce. Honda EU2000i has quickly become the customers’ favorite and is often described as one of the best inverters money can buy. How about the stronger and larger inverter generator – Honda EU3000is? Does it perform as well too? Is it worth its price? We will try to find out the answers in the following review article.

8.8 Total Score
Honda EU3000is - a top-notch generator
Honda EU3000iS is, without doubt, one of the best 3000 watt inverter generators on the market. It is a very quiet and extremely well-built generator. With all its design features which make it stand above its competitors, it is really worth its price. For those who have a budget for it - the Honda is the way to go.
Performance
9
Design
8
Noise Level
8
Ease of Use
9.5
PROS
CONS

Honda never goes on compromises when building their products. One of the reasons the EU2000i won so much love was its sturdy build and the original super reliable Honda engine.

The moment you start EU3000iS you realize that the same things can be said about this generator too.

It has a durable steel frame which guarantees that it won’t get easily damaged by weather elements.

However, this also makes this generator quite heavy and difficult to move around (unless you purchase an additional set of wheels). 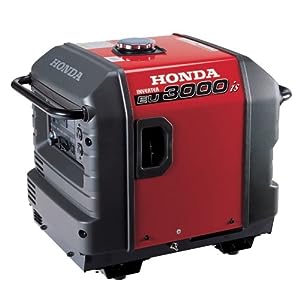 But this is something you just have to accept if you want an inverter generator with a 100% solid steel frame and no plastic.

This is more than enough to use with large electric equipment such as AC units.

While this might not be the quietest generator you can find, it produces much less noise than a lot of its competitors. 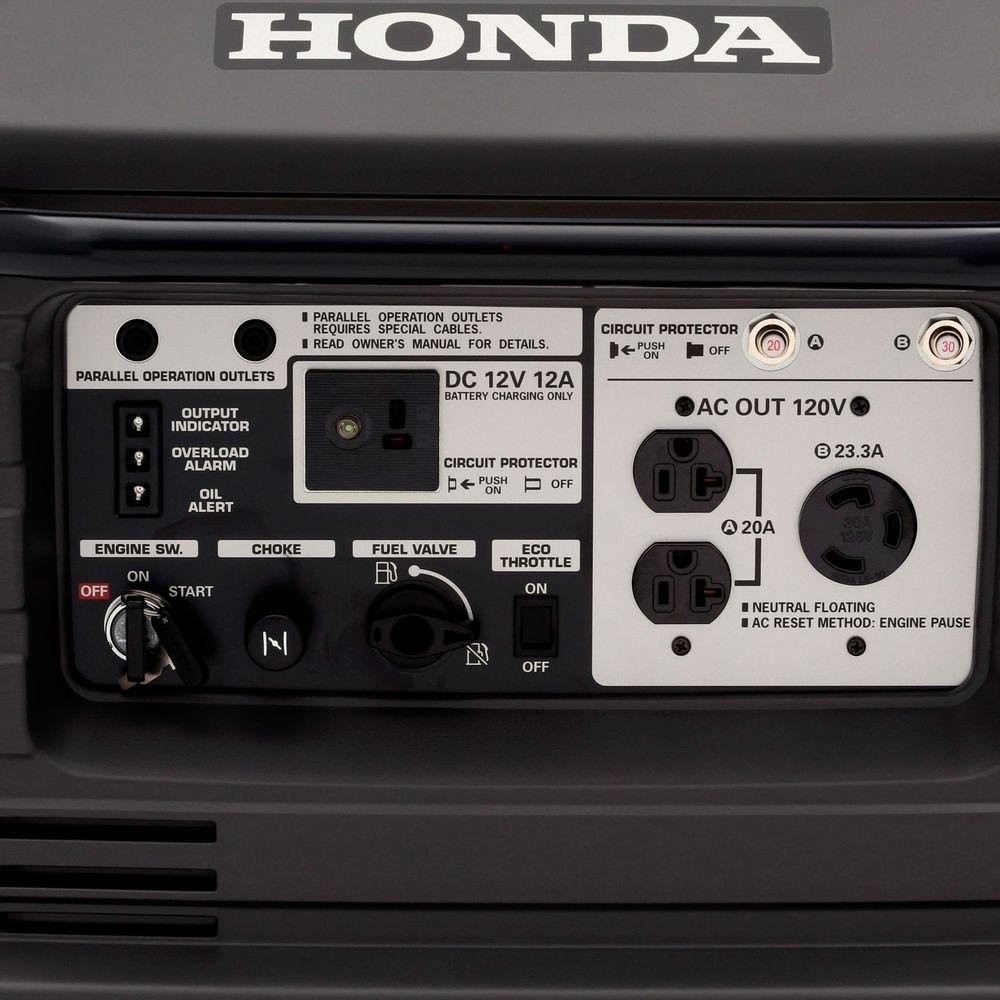 There are a lot of things to like about Honda EU3000iS.

First, the engine is powerful enough to run all major appliances used at most of the jobsites (excluding welders) and for the RVs.

For example, you could easily run an RV 15,000 BTU air conditioner with it.

It is also remarkably quiet for its size. The noise it produces even at 50% load is low enough to allow for a few people standing only a few feet away from the generator to have a normal chat.

Fuel efficiency is something I like a lot in all Honda generators and this one is no exception. You could easily plug in your camper van air conditioning unit and run it for the whole night.

This is thanks to Honda’s patented Eco-Throttle system which automatically adjusts the fuel consumption to the current energy requirements. (source: Honda)

Just like other Honda inverters, in case you really need a lot of running watts (eg. to power your household devices in case of a blackout), you can use a parallel kit to connect two of these generators to each other and double your total output.

It is also extremely easy to use. It features an electric start which takes a lot of burden off your shoulders. Just think how nice it is not to be forced to manually turn on the generator via a cumbersome recoil pull start.

However, in case the electric start fails for whatever reason, EU3000iS also has a built-in manual recoil to be used as an emergency option.

Even though this generator was designed specifically for job sites and outdoor use, quite a lot of people reported that it performed extremely well as a home backup source of power during the hurricane Irma.

These are the times when you really want a reliable 30 amp generator which can operate for days without a single break. Honda EU3000iS is one such generator.

The Downsides of EU3000is

Even though it is a really great and reliable generator, it is not perfect either. There are a few minor things I really think Honda could have done better with EU3000iS.

The first thing which I missed was the lack of a fuel filtration system. It would be a really handy feature which could help immensely with maintenance and prevent the debris from getting stuck in the carburetor. Even though it does not happen often, it would nonetheless be great addition which could give us more peace of mind.

I also believe that at this price level Honda should have included a few additional accessories instead of forcing the customers to buy them separately. A few things which instantly come to my mind include the wheel kit, a 12v charging cable, and an hour meter.

Honda EU3000is weighs slightly more than 75 pounds. So yes, it is a bit heavy. This is due to its sturdy steel frame which adds to the weight. However, this also provides better resistance against weather elements. You won’t have to worry that it will break down after several uses.

When buying EU3000iS you should absolutely get the wheel kit (sold separately). Without it moving this generator from one place to another can be a very cumbersome task. There is no chance one person can do that. On the other hand, if you add the wheels, things become much easier. You won’t find any major difficulties moving it around.

Comparing to a lot of other portable generators, this particular Honda 3000-watt generator operates reasonably quietly.

Just like most of the quality inverter generators, its engine is much more silent than the ones installed in old school type portable generators.

Can I use it as a home backup source of power?

With its 3000 starting watts, Honda EU3000iS is strong enough to run the most important household appliances in the event of a blackout. These include a refrigerator, furnace, an AC unit, or a set of lights.

Since this is an inverter generator you can also safely use it with modern portable electronics too (which is not the case with conventional generators). These include tablets, smartphones, notebooks, LCD TVs etc.

Note that you need to get a transfer switch in order to make it work as a home backup power supply. Otherwise, you won’t be able to connect this or any other portable generator to your house grid.

Short answer: yes, you can. However, bear in my mind that since it is a quite large appliance, it would require the generator to run at a higher load. This can make it quite loud so you’d better not run it at an RV park in the middle of the night (unless others are doing the same…).

How long can I run it for? Can it run for the whole night?

That depends on the load.

If you’re using only 25% of the load, then it should run for almost 13 hours.

So yes, if you only use it for one specific moderate size appliance (eg. a refrigerator) then it will run fine for the whole night.

Can I buy two of these and connect them to each other to double the total power output?

This is one of the greatest things about inverter generators and this one is no exception.

The only thing you need to do to make it happen is to purchase the dedicated cable kit and you’re good to go.

Can I use it in parallel with a 2000-watt inverter generator such as Honda EU2000i?

Both inverter generators need to have the exact same wattage in order to make the parallel capability work.

The best recommendation is to use the exact same two models to prevent any possible damage.

Does it have an electric start?

You can either use the electric start to switch on the generator or do it manually with the pull cord.

Out of these two options, the electric start obviously is the much more convenient one. However, if it ever fails for whatever reason, the manual recoil is always at your hands.

I’ve heard that 200,000 Honda generators were recalled this year in the US? Was it one of the models involved?

Nope! There have never been any known issues with Honda EU3000iS.

As far as we know, nobody has ever reported any particular problems with EU3000iS.

Yes, it is – residents of California can use it without problems.

Conclusion – should you buy it?

If you are looking for a quality inverter generator capable of powering large electrical appliances then I would say – yes. It is a really solid generator manufactured by the industry leader.

You can put a lot of trust in it knowing that it will run flawlessly whenever you need it. Even though it is really expensive, I personally think it is a good long term investment.