We are a reader-supported site. We may earn a small commission from purchases made through links on our site at NO extra cost for you.

If you have been looking for a generator, chances are, you have heard of Generac Power Systems. Generac is one of the most popular brands in the generator industry and offers generators of all sizes to accommodate different needs. Today, we are going to take a look at the Generac brand, and a few of their most popular generators.

Founded in 1959, Generac Power Systems produced portable generators under the Craftsman brand for companies such as Sears. With over 60 years in the industry, they have certainly made a name for themselves providing some of the highest quality generators. They offer many different sizes from the smallest, portable generators to larger, standby generators used commercially.

Today, they are one of the largest generator producers in the industry, going public in 2010. Their generators are sold at retailers across the world and are known for their performance and quality. Their name can be seen on commercial generators just about everywhere as they are trusted with providing power in any type of situation. 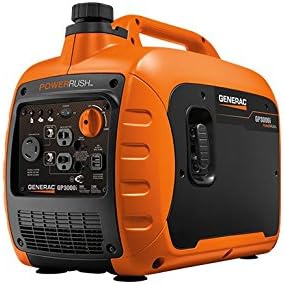 For those who are wanting a smaller portable generator that can still put out some power, the Generac GP3000i inverter generator is going to be a great contender. This generator puts out enough power to get most residential appliances powered up while still quite being portable.

Coming equipped with a 149cc engine, the GP3000i generator is able to put out 3000 starting watts and 2300 running watts. This is going to give you great power for charging up one large appliance or multiple lower wattage appliances through your next power outage. It can even be a great generator for tailgating, camping, or powering a couple of tools on the job site.

With a generator of this size, you can expect about 2-6 outlets, depending on what the generator is aimed for when it comes to primary usage. On the Generac GP3000i, you are going to get 5 great outlets to provide a great variety of different outlets. To power common household appliances, you will get 2 120V 20A 5-20R outlets. For smaller electronics such as chargers, you can utilize the two 5VDC USB outlets. For larger items, the 120V 30A L5-30R twist lock outlet will provide you versatility for items that require a larger plug. You will also get the convenience of this Generac generator being parallel ready to hook up another GP3000i generator for twice the power and additional outlets.

With generators of this size, you will usually have a smaller fuel tank. The 1.2 gallon fuel tank is going to provide you with an impressive 10.75 hours of run time at 25% load. This is perfect for keeping your smaller appliances running throughout the day or overnight during a power outage. 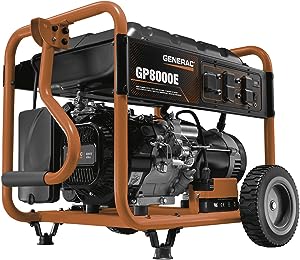 Moving up to the larger Generac generators is the 7676 GP8000E. This generator is a larger portable generator that is ready to take on just about anything that you can throw at it. It is built tough enough for the job site, but has all of the amenities that makes it great for home backup or RV use.

The Generac GP8000E is going to feature a large 420cc air cooled engine that is going to be capable of producing 8000 running watts and 10000 starting watts. This amount of wattage is going to allow you to power multiple large appliances while still being able to keep your smaller appliances powered up. It can easily be used to power up a whole RV as well.

Due to the larger size and power output of this generator, you are going to see more outlets that are ready to power up larger appliances. Generators of this size usually do not have smaller outlets such as USB outlets. This GP8000E generator is going to feature 4 120V 20A GFCI 5-20 outlets and a single 30A L14-30R twist lock outlet. This is going to allow for multiple appliances to be used at once without having to worry about using a splitter.

With larger generators come larger fuel tanks as this generator is going to feature a huge 7.9 gallon tank. This is going to help this generator power up to 11 hours at 50% load. This makes it ideal for those who are looking at powering A/C systems or furnaces overnight at their home or RV. 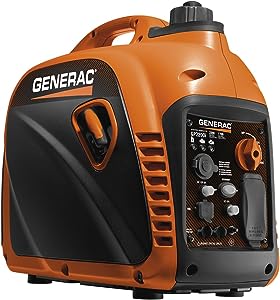 If you are needing something a little smaller and easier to transport than the GP3000i, the GP2200i is going to be a great alternative. While it does produce less power, it is perfect for those who aren’t needing too much power. This can be great for using small tools, running a TV or small appliance during a blackout, or for tailgating and camping.

Generators of this size do not require a very large engine to make their power. This is especially true with this GP2200i generator as it is powered by a small 80cc engine. This engine is not to be undermined as it does put out 1700 running watts and 2200 starting watts.

Even though this generator is one of Generac’s smaller generators, it does have a surprising amount of outlets. You can expect to power up many small electronics or appliances with the 2 120V 20A household outlets, the 1.5A 5VDC USB outlet, and the 12 VDC cigarette style outlet found on this generator. This will make charging up cell phones, laptops, and other smaller electronics a breeze. You will also get parallel capabilities which utilizes a parallel box with larger outlets.

Although small, this Generac generator is going to feature a 1.2-gallon fuel tank that will allow for an impressive 10.75 hour run time at 25% load. This is perfect for the overnight usage of a fan, radio, or other smaller appliances. 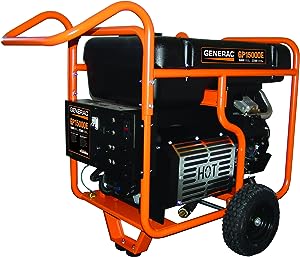 The largest of the Generac portable generators, the GP15000E is going to be a generator that is best suited for commercial use such as a job site. With this amount of power, it is going to be more than most residential users would need, unless you plan on doing a full home backup power setup.

The power that this massive 992cc engine puts out is pretty much the highest you can get in a portable generator. You can expect 15,000 running watts and 22,500 starting watts, enough to power up a whole house, a full size RV, or even your whole job site with ease.

This generator is going to feature a 16 gallon fuel tank that will allow for up to 10 hours of run time at 50% load. While you would think this would have a longer run time, the amount of power it can put out for 10 hours is highly impressive and will certainly give you some peace of mind during the hard times. 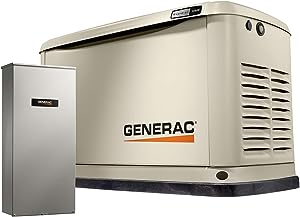 Last but not least is the extremely popular home standby generator, the G0071720 10kW generator. This generator is made to be a full home backup power standby generator that is ready to serve as an emergency power source in the event of a power outage.

Since this generator is not a portable generator, it is not going to have the same ratings that we usually look at. Instead, we can talk about all of the features you will get with this standby home generator.

This whole house generator comes ready to be installed outside of your home complete with an automatic transfer switch to easily install onto your home. This allows for easy switch over of electricity in the event of a black out. It comes with standard wi-fi connectivity for hands-free operation and remote monitoring.

It runs off of natural gas or liquid propane giving you the flexibility of different fuels for your install.

This whole home generator is going to be a great solution for those who frequently experience power outages and need most of their appliances to continue running.

The 10 kW whole home standby generator from Generac is going to be one of the easiest ways to keep your home powered up when the power goes out. With your choice of two different types of a transfer switch, you can find the one that works best for your specific setup. Getting backup power has never been easier, and Generac’s backup standby generators have been used for decades on homes, businesses, and shops around the world.

Are Generac Generators Any Good?

Generac generators are highly rated by satisfied customers. They provide generators of all sizes to solve multiple applications.

Are Generac Generators Made In China?

Generac generators are manufactured and designed in the United States. They have a manufacturing facility in Wisconsin that manufactures and builds each generator.

Who Makes The Engine For Generac Generators?

Generac also manufactures their engines in house at their Wisconsin manufacturing facility.

Although Generac Power Systems does not specify noise levels on their generators, they are on par with average noise levels in their power range.

Conclusion – About This Guide

Now that you are brought up to speed on what Generac generators are and why they have such a great reputation, you should feel comfortable investing in one for your needs. Whether you are needing a 2000 watt generator or a backup generator for your office building, Generac is going to have a solution for you.

Why are the portable generators usually so loud?

How to Ground a Portable Generator?

Westinghouse iGen2200 Review – one of the best inverter generators?