We are a reader-supported site. We may earn a small commission from purchases made through links on our site at NO extra cost for you.
Home » Generac GP2200i Review

Generac has also recently started manufacturing portable inverter generators suitable mainly for camping, tailgating, boats as well as portable backup power sources. Generac GP2200i is one of a few inverter generators the company has got on offer. How does it perform against competition? Is it worth its price? We will find out in the following Generac GP2200i review.

Generac GP2200i is an affordable inverter generator good for camping, tailgating or boats. It is quiet and compact enough to make it a good companion for those who are often on the move. 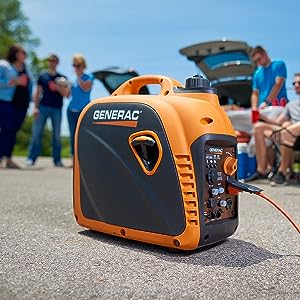 Generac advertises the GP2200i inverter generator as compact and easy to transport.

This is definitely true.

The generator weighs only 46 lbs which is more or less the same as arguably the most popular inverter generator on the market – Honda EU2200i.

No matter what your fitness level is, you certainly won’t have any problems carrying this generator.

The handle feels very comfortable in the hands making the generator easy to lift and carry around.

In any case this is enough wattage to power most of the equipment typically used for camping, tailgating or RV. These include 1500 water heater, refrigerator and stoves.

1700 watts is also enough to run a variety of work tools such as 4 gal air compressors.

The generator is both fully CARB and EPA compliant which means you can legally use it without any problems or specific permits in whichever state you live.

One of the best things about Generac GP2200i inverter generator is its long run time. Even at half load it runs for more than 7 hours. This is a really good score for a generator of this size.

This is partially thanks to its larger fuel tank capable of housing 1.2 gallons of gas. This is a bit more than in case of the most of 2000 watt inverter generators. At the same time the GP2200i weighs roughly the same as some smaller inverters which needless to say is a really good thing.

Another factor allowing this generator to run for a bit longer is the Eco mode. You can turn this feature on with a simple push of the button. It helps the generator optimize its engine functions to minimize the fuel consumption. Note that you won’t be able to use the Eco mode at higher loads. For example, don’t expect to plug in a 13,000 BTU air conditioner and run it in the fuel saving mode as this is a rather large appliance requiring more running watts of power.

On the other hand, if you want to charge portable electronics or smaller appliances like eg. microwaves – the eco mode works just fine.

The generator is also fully parallel ready allowing you to use the dedicated parallel kit to plug it into another 2000 watt inverter generator and run them simultaneously to get more power at your disposal.

The start dial is another handy feature unique for this generator. You can use this knob to switch between three modes – Choke, Run and Stop. This makes it very easy even for inexperienced users to start up and control the functions of this generator.

Is there anything to dislike about Generac GP2200i?

When preparing this GP2200i review I fortunately haven’t found any serious negatives about this generator.

I’ve just kind of wished it was a bit quieter.

It is certainly not the quietest generator I have ever reviewed (click here to check out the list of the most silent ones).

You can expect the GP2200i to produce around 60dB of noise at lower loads and it’s still gonna stay below 70dB even at the highest load.

Having said that, this is still definitely quieter than conventional “contractor type” open frame 2000 watt portable generators. This is one of the the conveniences you have to pay slightly more for when buying an inverter generator instead of a conventional gen.

However, this makes it louder than some really good and inexpensive 2000 watt inverter generators like WEN 56200i. 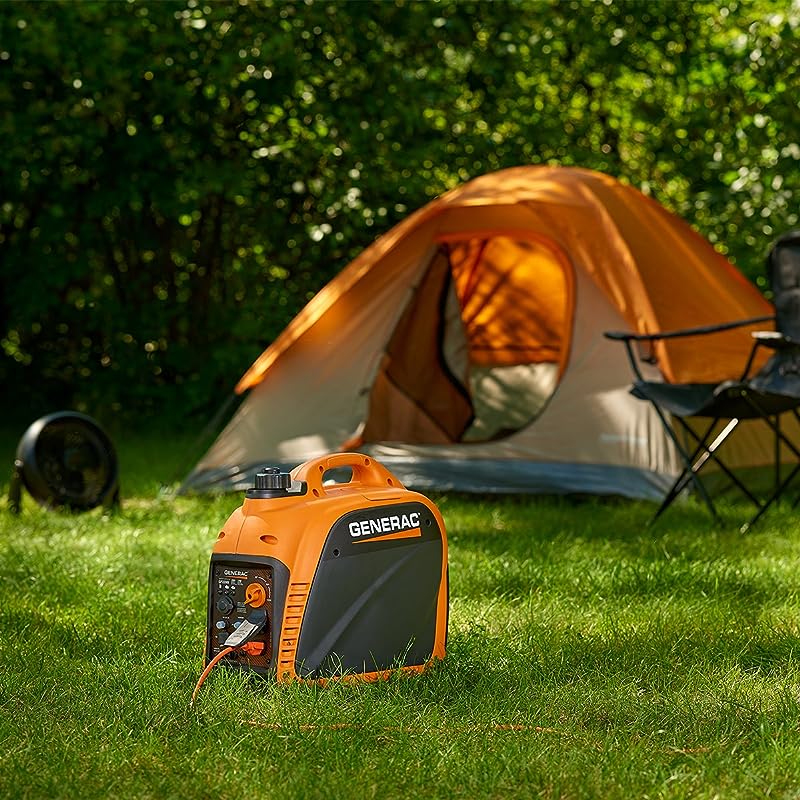 IQ2000 is another very popular inverter generator offered by Generac. These two generators offer the similar levels of quality and design. There a few notable differences between them though.

Because of its larger fuel tank and slightly more powerful engine, Generac GP2200i is also a bit louder than Generac IQ2000. This is probably one thing which makes me like IQ2000 a bit more.

Otherwise if I had to choose between these two generators I would probably go with the GP2200i. Especially since it usually sells for around $200 less than IQ2000 and offers a bit more wattage.

Check the Current Price on Amazon

It’s hard to provide the accurate reviews of inverter generators without making at least a few references to Honda generators. As for 2000 watt inverter generators, Honda EU2200i is currently by far one of the most models available and the direct successor to the uber-popular Honda EU2000i.

Generac GP2200i can’t rival EU2200i for sure in terms of the quality of materials used. Its finishing simply feels cheaper and slightly more sensitive. While the Generac is generally known for making solid generator engines, it’s still below the unbeatable quality offered by Honda.

GP2200i is also significantly louder than EU2200i. But then, hardly any other generator can beat EU2200i on this matter.

On the other hand, GP2200i costs a few hundred dollars less than Honda which is one of the primary reasons why customers opt for Generac instead.

One could say that this is one of the several reasonable cheaper alternatives to Honda generators available on the market. (Check out also Westinghouse IGen2200 or Westinghouse WH2200iXLT – both are among our personal favorites). 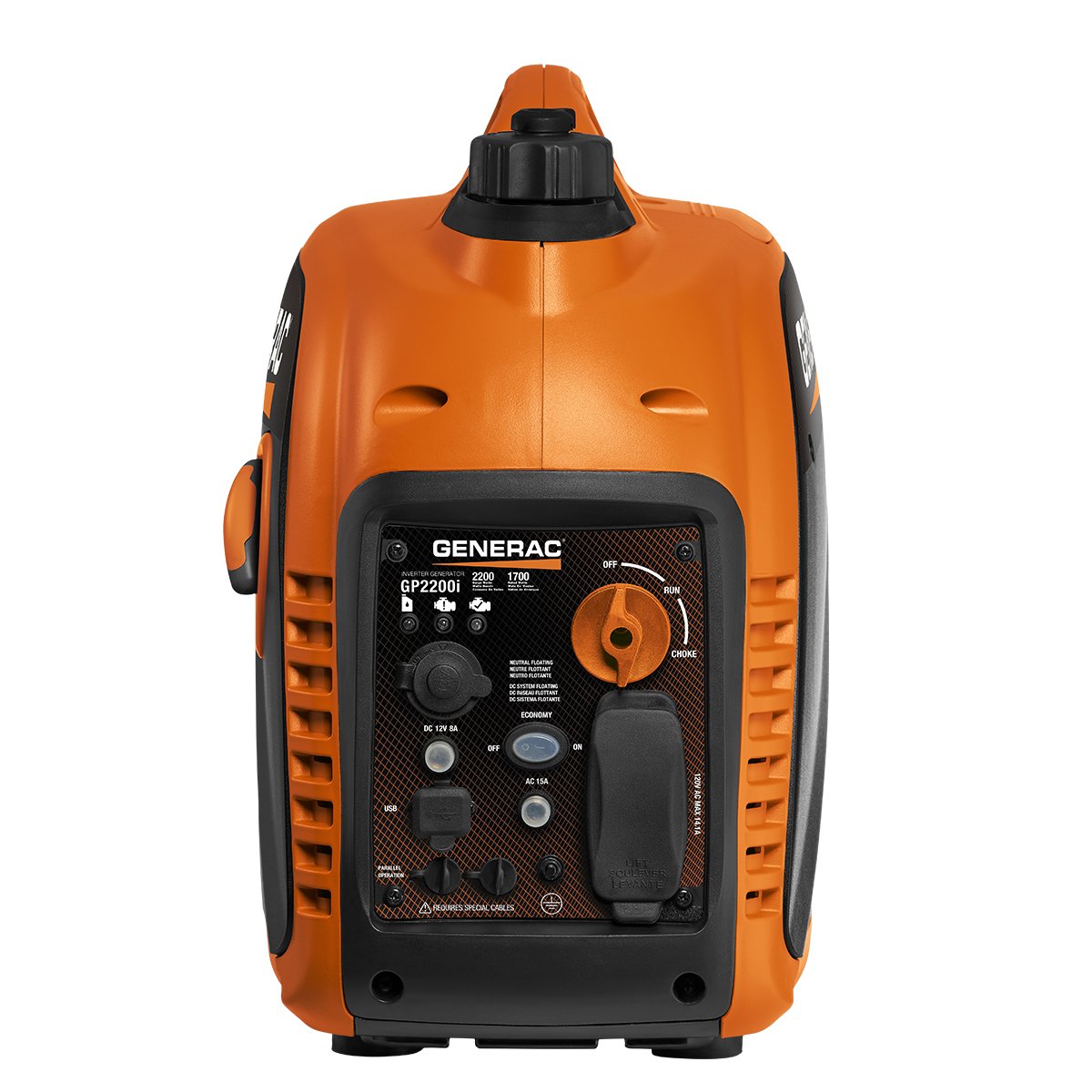 How difficult is it to start?

Not difficult at all. The manual recoil works just fine making it simple to start the generator with a single pull. The start dial control knob makes starting the generator even easier.

How difficult is it to set up?

It doesn’t require any specific set up or grounding etc. You can pretty much run it straight from the box.

Where is Generac GP2200i made?

It’s made in China.

Can I run it in parallel with Honda?

Yes, as long as both have the same wattage.

Conclusion – should you buy Generac GP2200i?

If you are looking for an inexpensive portable inverter generator for camping, tailgating or emergency power backup than I would say – yes, you can definitely consider GP2200i.

Even though it’s not the quietest generator out there and it can’t compete with the most expensive Honda or Yamaha inverter generators in terms of the quality of its built – it is nonetheless a good inverter generator suitable for casual use.

Buy It on Amazon