We are a reader-supported site. We may earn a small commission from purchases made through links on our site at NO extra cost for you.
Home » Firman Generators Reviewed – Are They A Good Choice in 2022?

Firman Generators Reviewed – Are They A Good Choice in 2022?

But can you trust these generators? Are they reliable enough?

Following hours of research, we have prepared the following Firman generator reviews to help you make the right decision.

We have shortlisted 5 Firman generators which we personally found out to be the best options. 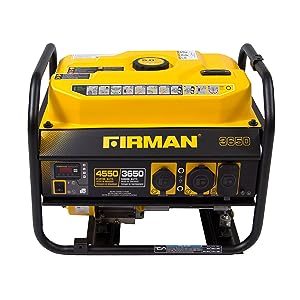 Firman P03601 is a solid portable generator suitable for most of the jobsites or RV camping.

It provides 4550 starting watts and 3650 running watts of power.

That makes it just about right for powering electrical tools such as air compressors, drills or belt sanders.

You could also use it to run the most crucial devices in your home in the event of a power outage.

Don’t expect to use it as a complete backup supply though. You would need a much larger generator to power multiple large devices at your home.

This 10,000 watt Firman generator would be the best choice for a home. It’s the right fit if you live in Canada.

If you need a generator for RV, you will find the Firman P03601 perfectly sufficient. P03601 can handle a 15,000 air conditioner without problems. The same applies to other equipment you might want to run in the AC (as long as you don’t try to turn on everything at once).

Depending on the load the generator can run for up to 14 hours. This time is bound to significantly shorter if you run the generator at a 100% load.

Firman P03601 has got a simple and user-friendly design. It has the standard set of 120V AC outlets and basic interface including the low oil level indicator.

Note that this generator is quite heavy to carry around. Sadly, you need to order the wheel kit separately which is quite a nuisance. On the positive side, the wheels are easy to attach and you won’t have any problems connecting them to the generator. 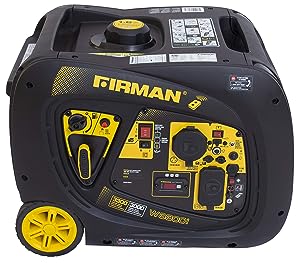 Firman W03083 is currently one of the most popular Firman generators. This inverter generator has got in total 3300 starting watts and 3000 running watts of power.

This is enough wattage to make it a very reasonable choice for RV.

It should easily handle a typical 13,500 BTU Air Conditioner and a few minor electrical appliances such as a microwave, a set of lightbulbs and a phone charger.

The fuel tank has got a total capacity of 1.8 gallons.

Depending on your circumstances you should be able to run this generator for up to 8 hours. Bear in my mind though that you might need to refuel sooner if you run it at a higher load.

However, if you are only planning to run the aforementioned air conditioner in your RV for the night, Firman W03083 should be able to run it without interruption till the morning hours.

We find this generator to be very easy to operate thanks to its user-friendly control panel and the electric start.

One thing we dislike about this generator is that it’s louder than some other inverters.

The manufacturer advertises its noise level as 58dB which is already more than in the case of some of its competitors.

However, this is the sound level at 25% load. The generator can become much louder if you run it at the max load.

The noise level is an issue with many other Firman generators too and that’s where the company has got quite some room for improvement.

Overall we would say it’s a decent inverter generator. On the other hand, there are other 3000-watt inverter generators costing the similar price and performing a bit better. Champion 3100-watt generator or its dual fuel cousin are some of the prime examples. 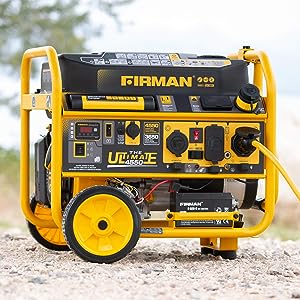 Firman P03612 is currently one of the most popular portable Firman generators sold in Canada.

The generator delivers 4550 starting watts and 3650 running watts of power.

This is enough power for emergencies and construction use.

The generator will easily run the critical household equipment including refrigerator, freezer and lighting circuits.

The fuel tank has got a total capacity of 5 gallons.

Depending on your circumstances you should be able to run this generator for up to 14 hours.

The control panel of P03612 features several outlets, each designed for various purposes.

We find this generator to be very easy to operate thanks to its user-friendly control panel and the electric start.

One thing we dislike about this generator is that it’s quite heavy and loud at higher loads.

However, that won’t be a major issue at all if you plan to use it mainly as a home backup source of power or at work.

Overall, if you need a mid-sized 4000 watt generator for home or work – this Firman generator won’t disappoint. 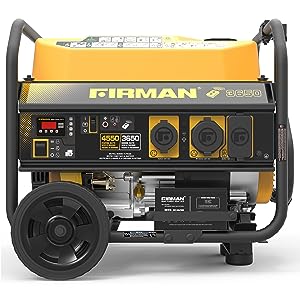 This is one the most popular Firman generators up to date.

It has a very convenient remote start which makes it stand out of the competition.

Few other generators come with a remote start making this Firman gen an interesting choice.

Its engine produces 4550 starting watts and 3650 running watts of power.

To give you a better idea of what you can run with it these are some the tools and appliances this generator could power:

That makes it more fuel-efficient than a lot of competitors.

The generator is fully CARB compliant – California residents can use it legally without problems.

Albeit a bit on the heavier side, the generator is quite easy to move around.

This is thanks to the heavy-duty wheels and a comfortable handle.

The remote start works flawlessly and is one feature of this generator we love the most.

The manufacturer claims the remote start works up to 168 feet away, however, in reality, you might want to stand a bit closer to the generator.

Overall this is a very good generator for a construction job.

RV owners would also be happy with it as it can easily handle pretty much all important RV equipment such as ACs, lights, refrigerators etc.

It sells comparatively cheaper than many other generators, offering good quality.

If you need a generator for an emergency home backup power supply – you should also have a look at this Firman generator. 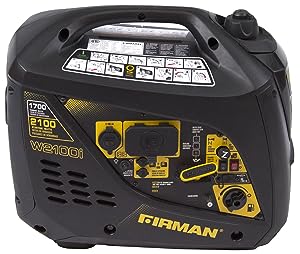 This is one of the inverter generators being on offer by Firman. It is primarily designed for such uses as camping, boats or tailgating.

That makes it optimal for small scale use and sufficient to power one single mid-sized electrical device at a time or a few portable electronics such as speakers, laptops, phones etc.

You could also use it to run some work tools like chainsaws or drills.

Firman W01781 has got a 9-gallon tank. Unless you constantly use the generator at its full capacity, it should run without interruptions for anywhere between 9 to 12 hours.

It is not very heavy – at 51.6 lbs it is reasonably easy to carry around.

Firman W01781 comes equipped with a built-in muffler which helps in minimizing the noise. However, this is certainly not the quietest generator on the market and is a bit behind some of the top performers on this matter such as Yamaha EF2000iSv2 or WEN56200i. 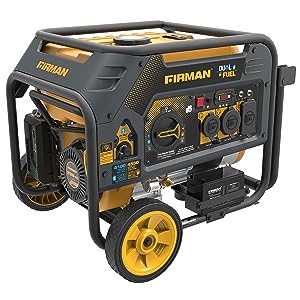 Firman H03651 is a dual fuel generator which can operate both on gas and propane.

It is fully CARB compliant meaning that even the residents of California – the state with the strictest environmental measures – can legally use it there.

It has a solid 208cc dual-fuel engine complete with standard features such as low oil shutdown mechanism and cast iron frame.

The tank is not very large – it can house up to 5 gallons of gas.

This would be enough to run the generator continuously for up to 14 hours. This is provided that you don’t attempt to constantly run it at full output.

The generator has got 4550 starting watts and 3650 running watts, making it powerful enough for moderate size 30 amp travel trailers.

You can also use it at most of the jobsites (unless you are planning to run a 220V MIG welder – this generator is not suitable for these).

Firman H03651 comes with a 5.5 ft LPG regulator hose included in the kit. Propane bottles have to be obviously purchased separately.

Where Are Firman Generators Made?

Firman Generators are made in China.

Firman belongs to Sumec Group – a large corporation specialized in energy engineering construction and other related services (see: bloomberg.com).  Sumec is one of the members of China National Machinery Industry Corporation (Sinomach) – a massive conglomerate of enterprises providing construction equipment and engineering services. Sinomach is one the Global 500 list annually published by Fortune magazine showcasing the world’s top-performing enterprises.

Are Firman generators any good?

While still relatively new to the US and Canadian markets, Firman generators have already gained a solid reputation. Since Firman is concerned with building their market presence and good reputation, they pay a lot of attention to the generators they build. That’s also why they sell for the fraction of the price of most of its top tier competitors.

When buying a Firman generator you are getting a reliable generator without having to pay excessive sums for an expensive unit from famous brands like Honda or Generac.

What size Firman generator do I need?

We recommend checking our wattage calculator to get a solid estimate of how big of a generator you need.

9.3 Total Score
Top Choice - Firman P03601
Generatoradvisor.com is a participant in the Amazon Services LLC Associates Program, an affiliate advertising program designed to provide a means for sites to earn advertising fees by advertising and linking to Amazon.com. As an Amazon Associate I earn from qualifying purchases.