We are a reader-supported site. We may earn a small commission from purchases made through links on our site at NO extra cost for you.
Home » Duromax XP12000EH Review – the Real Beast Among Generators

Duromax XP12000EH has got the official nickname “The Beast”. It is a well-deserved one given that this is one of the most powerful portable generators you can find.

With its 12000 surge and 9500 running watts, you could perfectly use it as a comprehensive home backup power solution and save yourself the hassle and costs of installation of standby generators.

However, leaving the power aspect aside, is Duromax XP12000EH a reliable generator? Can you trust it to run flawlessly in the event of an emergency? We are about to find out in the following Duromax XP12000EH review.

The control panel houses a large number of outlets.

As you can see “The Beast” is designed to run a wide range of tools and appliances. 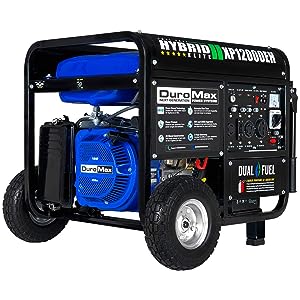 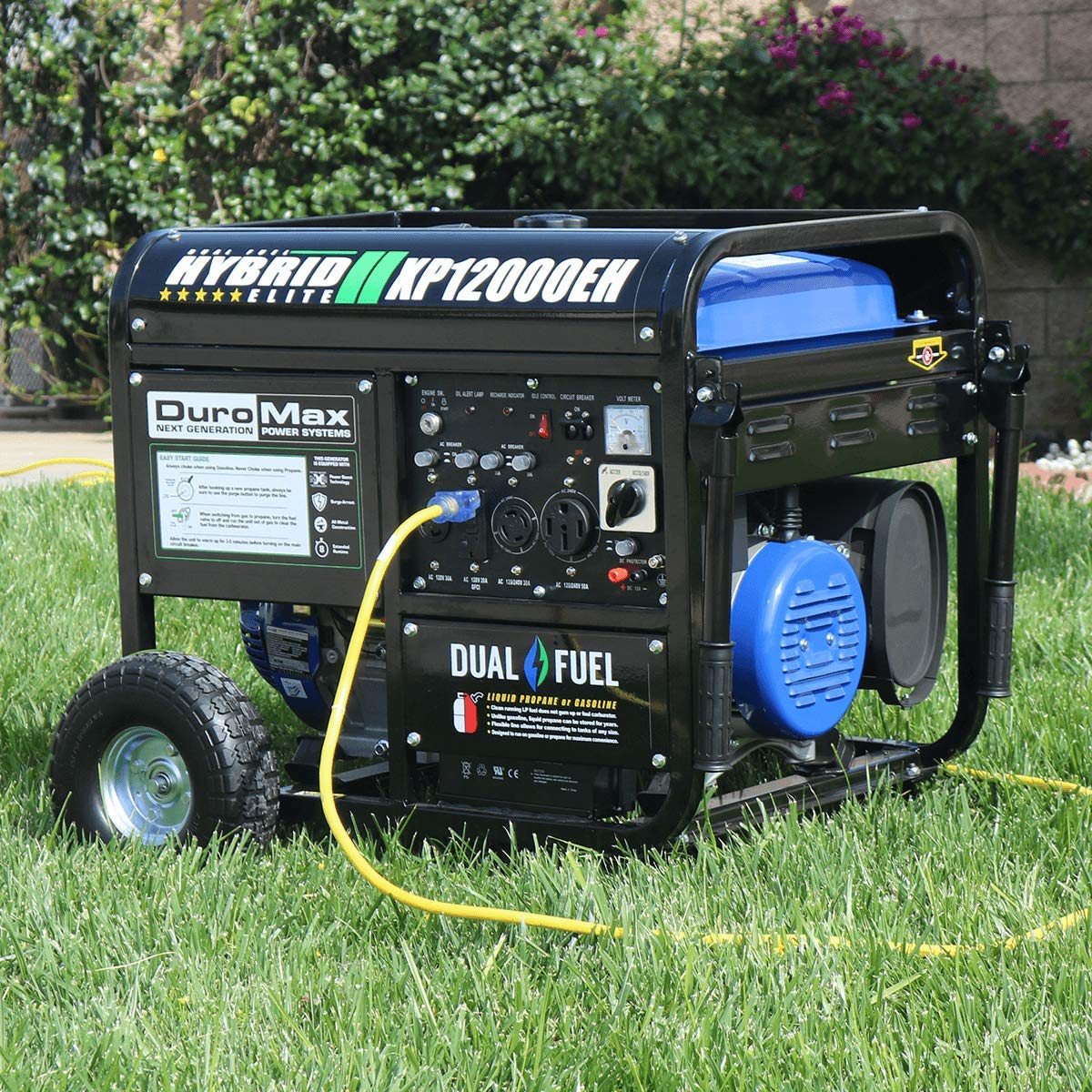 The problem with most of the portable generators is that they are usually designed to be used either at construction sites or remote locations where the user only needs to power a few smaller electrical tools or appliances.

Most of them are not meant to be used as a home backup power supply since their total power output is way too small.

Only the ultra duty portable generators can handle larger electric loads. However, there aren’t many good 10000 watt generators and they usually cost a lot too.

Duromax XP12000EH is one of the few generators of this size which actually performs well and also doesn’t cost a fortune.

Its 12,000 starting watts is absolutely more than enough to run most of the critical appliances in your household without the risk of overload.

It is also powerful enough to run one of the most demanding electric tools – a 230 Amp MIG welder.

Dual fuel generators are generally a better solution than the units relying solely on gas. That’s because first, running a generator on propane is cheaper than gas. In the longer term, this would save you a lot of money spent on fuel.

Second, the availability of two fuels allows you more flexibility and longer runtime as you don’t have to constantly worry about refueling the generator.

Duromax XP12000EH can easily run continuously for nearly 15 hours on both fuels combined (depending on the current load).

This is a massive advantage during a prolonged power outage.

Switching between fuels is also very easy and is only a matter of a push of a button.

Following the recent California power shutoffs which affected more than 3 million people, it’s not surprising that more and more Californians are willing to invest in a reliable portable generator.

The problem is – a lot of generators (especially the large ones) are not compliant with strict California Air Resources Board (CARB) regulations. This makes them illegal to use within the state boundaries.

Fortunately the Duromax XP12000EH is fully CARB compliant. If you are based in California, you can legally purchase and use this generator without any problems. 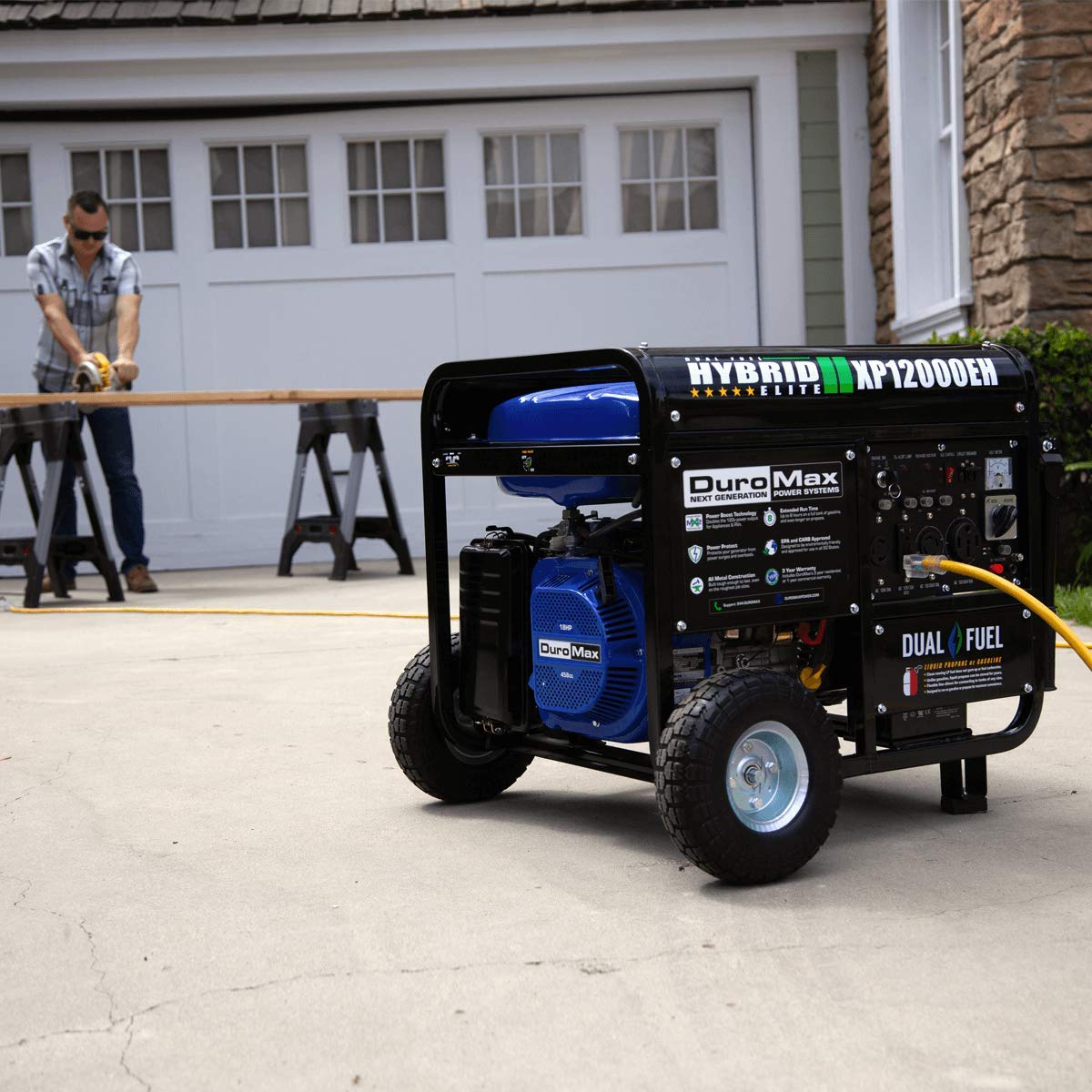 As you could expect from a generator this big, it’s definitely not a quiet unit.

If you run it at full load, the generator can be really noisy.

However, you’d probably agree with me that noise is not the primary concern during an emergency or at a work site.

The generator is also very heavy and difficult to move around.

Unless you are a really fit and strong person, definitely find somebody to help you move it around.

Conclusion – Is the Beast worth its Price?

If you need a comprehensive home backup solution but don’t want to invest in a very expensive standby generator, Duromax XP12000EH can be the right fit for you.

It produces enough power to run all critical household equipment.

Since it’s a dual fuel generator, you would be able to run it continuously for long hours without interruptions and save money on gas too.

This is one of the strongest generators currently for sale and in this wattage range there are hardly any other generators that can compete with Duromax XP12000EH.

If I were looking for a ultra-duty dual fuel generator to power the entire house in case of a blackout – I would seriously consider getting the Duromax XP12000EH.

My name's Craig, I am a general contractor currently living in Dallas, TX. I've worked with different kinds of electric tools throughout my career, including the portable generators. In my spare time, I love going camping and tailgating with my family and friends. I've created this site to provide honest advice for people looking for the right portable generator and other related equipment for work and leisure.

How many solar panels are needed to power a home?

Paralleling Generators – How Does it Work?

Why are the portable generators usually so loud?

Are solar panels worth buying?

Solar Generator Reviews – Which One is The Best?