We are a reader-supported site. We may earn a small commission from purchases made through links on our site at NO extra cost for you.
Home » Duromax 10000 Watt Generator Review 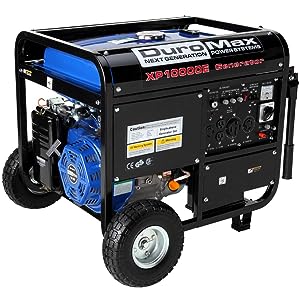 Duromax XP10000E 10000 watt generator is a powerful generator that you can safely use on construction sites or as an emergency home supply. With its 10000 starting and 8000 running watts, it provides enough power for most of the applications.

For example, you can set up a complete home backup supply without having to invest in the installation of a standby generator. Those who live in the disaster-prone areas (eg. residents of Florida) will surely want to consider this model.

You can also power multiple large construction tools using this generator such as air compressors, circular saws, welders and drills.

The generator surges at 10,000 watts making it suitable for large scale use. It provides 8,000 running watts of power which is a very decent amount and would be enough to power crucial home appliances in an emergency.

Duromax created a low oil shutoff switch which prevents the generator from running after it has used too much oil. The generator will simply stop itself from running if there is not enough oil in the tank, making maintenance a bit less gruesome.

You can choose between the electric and manual start. While in most circumstances you are definitely going to use the electric start, the manual recoil is a good backup option.

The 16 HP 440cc OHV engine is one of the strongest Duromax has got on offer. It is also one of the largest engines you can find in the portable generators being sold in the US.

The steel frame on the Duromax XP10000E 10000 watt generator is quite good at protecting it from external threats. It does a good job preventing damage caused by rain or wind. What’s also important is that the generator is easy to clean. You can simply remove the dirt with a damp cloth.

Read More about This Generator on Amazon

These are some of the devices you can power with this generator in the event of a power outage. You can run all the listed equipment simultanouesly.

These are some of the comon electric tools you can run with this generator. Note that you obviously won’t be able to run all of them at once.

Check out our calculator for a better estimate of how big of a generator you need to power all your required equipment.

Note that Duromax XP10000E still won’t be enough to power a 200 amp 120V MIG welder. You need a generator with at least around 9000 running watts to run such welder. Duromax XP12000EH is one such generator.

The Duromax XP10000E is a very durable and solidly built generator.

This gives it decent protection in tougher conditions.

With its 8000 running watts (which translates to 50 amps) is can easily handle most of the appliances in your household.

These include the most power demanding ones like an AC or heating.

It is in fact strong enough to run nearly the whole mid-size home during an emergency. At the same time, you can move it from one place to another without major hassle, which is definitely not the case with standby generators.

The large fuel tank is one feature you can immediately notice about this generator.

Its total capacity is 8.3 gallons.

How about its fuel consumption?

It does actually pretty well on this matter.

At 50% load, you could expect it to run for around 10 hours without the need of refueling.

This does not make it the most fuel-efficient generator we’ve ever seen but it’s still a very solid number and totally enough for most of the users.

Unless you try to plug in everything in your house, you can pretty much run it for the whole night even at slightly higher loads.

The Duromax XP10000E is both EPA and CARP compliant. This means you can legally use it anywhere in the United States.

The Duromax XP10000E is a bulky unit that may not be the best fits for those who want to often move it between different places.

Generators of this size can become cumbersome which is a completely normal thing. However, this is the only real issue you will discover with this unit.

Ultra heavy-duty generators are also generally not cheap, and Duromax XP10000E is not an exception.

Having said that, it generally sells for less than some of its competitors in its range. 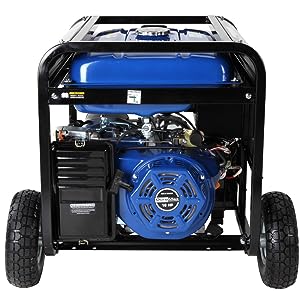 The Duromax XP10000E is a sturdy unit that will provide you with the power you need to simultaneously run several large electric tools or keep the house operating in case of power loss. Refilling and maintenance are quite easy, and it shuts down at the first hint of trouble.

Overall, it’s a very versatile generator, highly recommended for those who need a lot of wattage. On the other hand, if you are looking for a smaller and more compact generator eg. for camping – XP10000E is gonna be way too big. Look for inverter generators instead such as this one made by Champion.

8.3 Total Score
Good choice for those who need more power

With its large fuel tank, high voltage and solid design, Duromax XP10000E is one of the most recommended portable generators in the 5000 – 10000 watt range. It is suitable for those who need a generator for a home backup power supply.